The City of Auburn, Alabama wanted a strategy to reverse the decline along Opelika Road, a major corridor extending from downtown to the city limits. We were part of a planning team led by Design Workshop. Our role was to evaluate local real estate trends and identify realistic development opportunities that would help reverse the corridor’s current stagnation. As part of the implementation phase, we also evaluated the merits of various public and private financing mechanisms that could be employed in the study area. 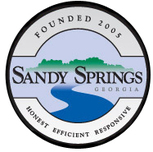 The City of Sandy Springs issued a Request for Proposals seeking a master developer for its 14-acre City Center project that will include a new city hall, performing arts center, housing, and retail space. We were retained to help evaluate the merits of developers’ proposals, particularly the economic implications.

City of Atlanta Mayor Maynard Jackson created a special task force to prepare a revitalization plan for a 23-block area of downtown, known as Fairlie-Poplar. We were hired and launched a three phase study consisting of: 1) area familiarization; 2) conceptualization and testing; and 3) plan and implementation. The goal was to formulate a strategy to reverse Fairlie-Poplar’s downward spiral and to create a foundation for positive change. Subsequently, we were retained by the Fairlie-Poplar Task Force to coordinate the implementation program.

The City of Alpharetta, in concert with a developer, was planning an ambitious mixed-use project in its downtown that featured office and retail space, as well as a new city hall. City officials decided that an objective assessment of the office and retail markets was needed in light of deteriorating economic conditions. An independent assessment of the development program was also requested.

The City of East St. Louis hired a team led H.J. Russell & Company, an Atlanta developer, to analyze potential development opportunities in its central business district. We contributed our market expertise to the effort. Our charge was to formulate a strategy for downtown to reverse the downward spiral that has existed for decades, focusing on realistic development opportunities that could provide a basis for long-term renewal.
HADDOW & COMPANY  |  ONE MIDTOWN PLAZA  |  1360 PEACHTREE STREET NE  |  SUITE 1000  |  ATLANTA, GEORGIA 30309
www.haddowandcompany.com  |  Phone: 404.577.7222